How to Read Notes in a Virtual Meeting and Stay Engaged

How to Read Notes in a Virtual Meeting and Stay Engaged

It’s painful to watch someone read from notes or any kind of a script during a virtual meeting. As an audience member it feels inauthentic, less like a conversation and more like a one-sided monologue.  It also makes you appear unprepared.  But the advent of virtual meetings and new tools, like teleprompter apps or transparent notes would seem to allow presenters more discreet access to these memory aids than when in person. Or do they?? What if you could learn how to read notes in a virtual meeting and stay engaged?

Likely you’ve been in virtual meetings where the presenter has relied heavily on their notes.

How do you know this?  Because unless that presenter has put in the many months or years of training that professional actors do to be able to read conversationally from a teleprompter, you will almost certainly give off a number of easily recognizable cues to your audience, including:

So while your audience may not see your notes or script, they will see a presenter that is disconnected from their message and their audience.  And in a virtual world, this is a recipe for instant tune out.

The Actors’ Solution to Using Scripts

Fortunately, actors are no strangers to working with scripts and have developed a technique for incorporating them as naturally as possible into the rehearsal process. Now the actor rarely shows up without having done their homework on the script, that is called a “Cold Read.”  And even the best actors in the world struggle to convincingly deliver a script they are unfamiliar with. Instead, the actor familiarizes themselves with the script as much as possible so that they can spend rehearsal time forming connections with the other actors. Connections that can’t happen if everyone is face down in a script.

But they are still not “off-script” so when they come to a point in their conversation where they don’t know the line, they will pause, glance at their script, and look in the eyes of the other actor, and then before they say the line out loud.

In this way they are disconnecting for only a moment to quickly confirm and internalize their line, as opposed to just “reading lines” to each other. This process of finding a line, connecting with the other actor, then delivering the line continues for many weeks of rehearsal until it becomes unnecessary.

When you hit those occasional “blank” spots or need to share new or more detailed information in virtual meetings you can easily apply this process while maintaining your credibility and connection. Here’s how it works:

Get Familiar with your Script or Notes

No virtual meeting, recording or call should ever be a “Cold Read.” The more familiar you are with your content in terms of sections and general flow, the better prepared you will be. I recommend reading through your script or notes multiple times, until you can picture approximately where a particular point or topic is, and even perhaps the page or slide it’s on. (That will help you locate them quickly and efficiently in the last step.)

Get more tips on how and what to memorize in your presentation here.

Position Your Script or Notes

Place your notes or script in a spot that makes it easy for you to glance at them without making a huge leap with your eyes. If your notes are on screen, place them as close to your camera as possible. If you are using multiple screens and need frequent access to your notes or script, be sure to put them on the screen that holds your camera.

Note: Teleprompter apps can be more awkward than helpful in this regard.  They are made primarily to be used for entire recordings or speeches.  The continuous flow or the teleprompter can be distracting for occasional use.

If you prefer using printed notes, type or write them out in an easily-readable font and place them on an easel just behind or to the side of your camera. A physical whiteboard placed behind your camera also works well if you only have a few key bullet points.

So there you are, delivering your presentation when suddenly you can’t remember what the next point is. Don’t panic. Instead, pause. Glance at your script and locate the specific line or point you need. Then, instead of keeping your head down and reading it from your notes, return gaze to the camera and deliver your point to the eyes of your audience.

There is generally no need to talk while you’re glancing at your notes. While the pause may feel terribly long to you, know that your audience has a difference sense of time. Besides, virtual presenters as a rule do not pause nearly enough and this can provide a needed break. If however, it is going to take you longer than ten seconds to locate the information, let your audience know.  The point is not to prove that you know everything and don’t need notes, but to show that you are well-prepared if needed.

Practice this process before your presentation.

Don’t try this attempt for the first time during a virtual meeting. Practice it on your own in front of your camera and screen.  It will feel choppy initially, because like many things on video, it’s counter-intuitive and you will need to place extra focus on the technique itself until it becomes muscle memory. But once you get used to it you will find that you are able to quickly find a spot in your notes, see one or two keywords that trigger your memory, and go right back to the camera.

If like most presenters, you’re using notes to fill in gaps, access specific data points, or locate answers to questions, this technique will allow you to seamlessly maintain a connection with your audience and deliver your presentation in a more natural and conversational way.

To learn more about how you or your team can apply this and other Professional On-Camera skills for more natural virtual conversations, contact me.

Learn how to quickly build trust and avoid the 10 “Credibility Crushers” in virtual meetings, calls and recorded videos. https://juliehansen.live/trust/ 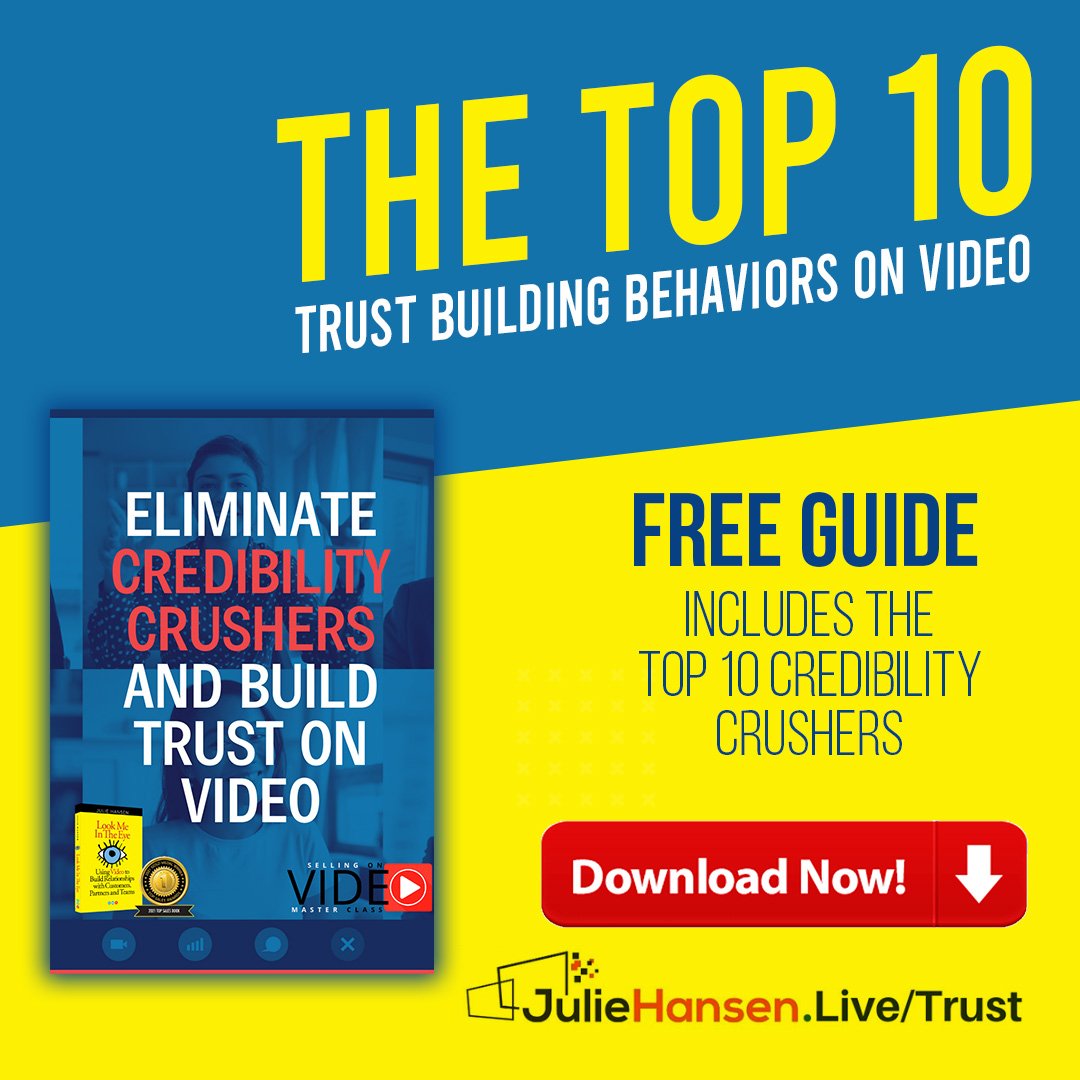 The Right Way to Ask a Question in a Virtual Meeting

Improve Your Virtual Presence: Tips from the Big Screen 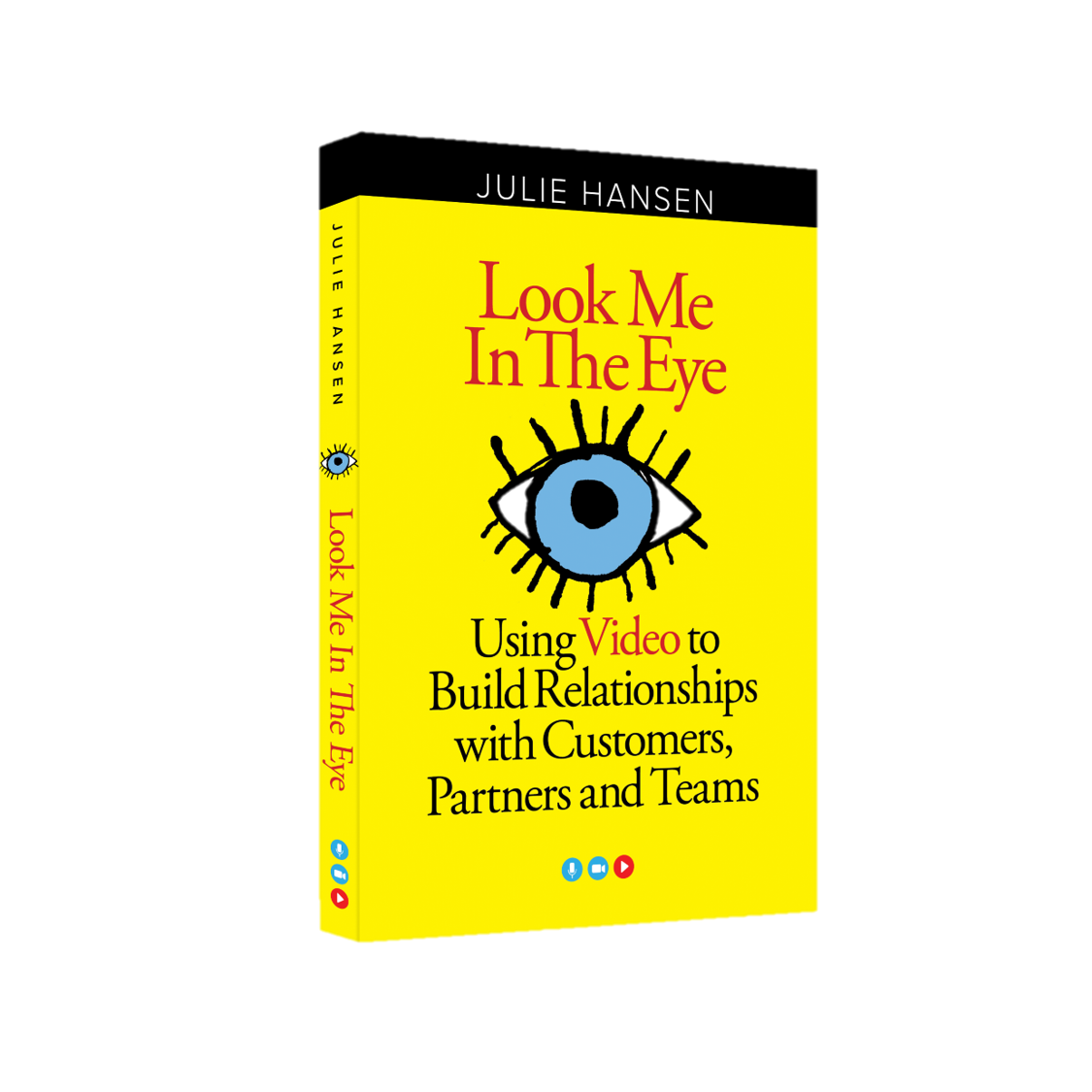